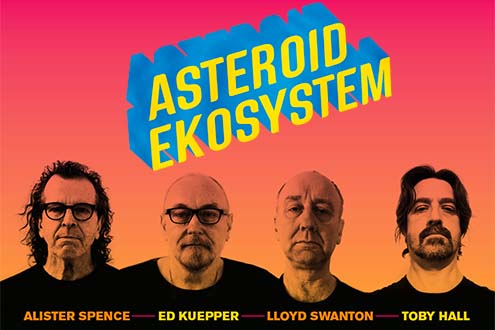 ‘It’s not jazz, it’s not rock…Whatever you want to call it, this is one mighty sonic trip that paints colourful pictures in the mind.’ – Noel Mengel, The Music Review Loudmouth Magazine.

The brainchild of pianist and composer Alister Spence, Asteroid Ekosystem is a supergroup for the 21st century bringing together four of the countires most acclaimed and talented musicians. Spence; the leader of avant-improv group the Alister Spence Trio and touring keyboardist with Sunnyboys, The Aints! and Laughing Clowns, bassist Lloyd Swanton of jazz giants The Necks and the catholics), world class percussionist Toby Hall on drums and the legendary and pioneering Ed Kuepper; guitarist and founding member of The Saints, Laughing Clowns, The Aints! and a solo career that has now stretched into 37 years.

“I first heard Ed Kuepper’s music more than thirty years ago. His interest in and skill with sound and improvisation came across so clearly. His songs always unfolded in interesting ways and often opened out to be extended by the players in his bands.” – Alister Spence

Late in 2020 Asteroid Ekosystem released their eponymous debut album, a double length CD that took Spence’s verbal sketches and melodic cells into new and unknown terrain that earned them rave reviews from around the world and saw them shortlisted for the 2021 APRA/AMCOS Art Music Awards under ‘Jazz Work of the Year’.

With Kuepper’s schedule of releases and live activity – most recently with Dirty Three drummer Jim White – plus Swanton’s ongoing commitments with The Necks coupled with the many covid-inspired lockdowns meant live activity has not been an option for the fab four but finally a window of opportunity has opened up that will see Asteroid Ekosystem play live in Sydney, Canberra, Melbourne and Adelaide this February-March.

Dinner from 6.30pm / Show from 8.00pm
Tickets via brunswickballroom.com.au