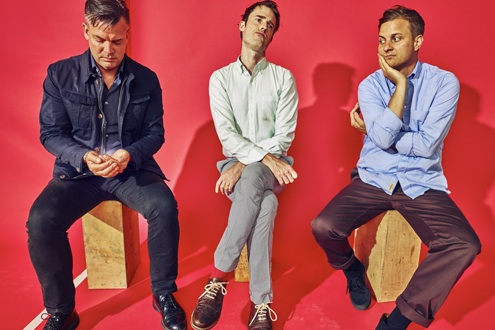 Already confirmed for the 2016 Laneway Festival, Feel are now pleased to announce headline shows for Brooklyn based trio Battles.

The idiosyncratic three-piece, featuring drummer John Stainer (The Mark Of Cain / Tomahawk), bassist and sonic manipulator Dave Konopka and multi-instrumentlaist Ian Williams, will bring the noise via new album La Di Da Di for side shows in Sydney and Melbourne.

“With a setlist dominated by La Di Da Di, the prospect of Battles live can only be described as controlled chaos. Its a totally relentless attach of glitches out guitars, looped synths and drummer John Stanier’s all-out sonic assault. They’re simply a can’t-miss act” – Consequence Of Sound October 2015

Previous visits have seen the Brooklyn based three-piece land The Big Day Out (twice), sell-out a Sydney Festival Becks Bar performance and appear as guests of the Brian Eno curated Sydney Opera House Luminous Festival. This time, with Laneway occupying the main stage, Battles have opted for limited capacity club shows. Expect the shows to sell out and sell-out quickly.

There are few greater privileges than to see a band like Battles in a setting like the Opera House. They’re a sonic volcano that erupts with every note they play. In short: It was fucking incredible. – Faster Louder 2009

Its Battles. Live. Don’t you dare miss them. Tickets for all shows are on-sale now.