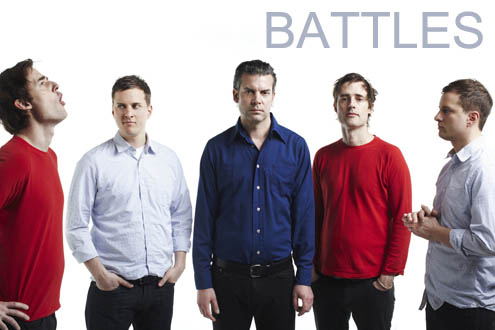 Anyone who witnessed NYC group Battles at the Big Day Out in 2008, at their sold-out Sydney Festival Becks Bar show in the same year, or at either of their sold-out Sydney Opera House Opera Theatre shows for the inaugural Brian Eno curated Luminous (nee Vivid) festival in 2009 will testify to their greatness as a live act. The former four-piece (now a three piece) are like a force of nature, rhythmically compelling and visually stimulating using both their skill as musicians and the technology available to them to create a sound and presentation of all their own invention.

There are few greater privileges than to see a band like Battles in a setting like the Opera House. They’re a sonic volcano that erupts with every note they play. In short: It was fucking incredible. – Luminous review – Faster Louder 2009

And while the band no longer features sometime frontman Ty Braxton they do still retain core-members Ian Williams (guitar, keyboards, electronics), guitarist, bassist, programmer Dave Konopka, and drummer and cult-hero John Stanier, a member of US group super-group Tomahawk and drummer for Australia’s premier hard-rock band The Mark Of Cain.

A man revered by many, he takes centre stage, sweating through his white button-up shirt as he pounds at his miniscule drum kit, destroying drumstick after drumstick like a golfer stuck in a deep sand bunker. The well-documented two-metre high cymbal stood above the band like a sunflower, yet was not spared in Stainer’s constant barrage of beats. The man is by every definition more drum kit than human. – Luminous review – Faster Louder 2009

Battles return to Australia in 2012 to perform at all six Big Day Out Festivals and for headline appearances in Sydney and Melbourne. These will be the band’s first Australian appearances since 2009 and the first since the release earlier this year of their second album Gloss Drop, a ten-track odyssey that includes cameo performances from electronic pioneer Gary Numan, Blonde Redhead vocalist Kazu Makino and underground dance music hero Matias Aguayo.

Gloss Drop is the most ride-the-groove record Battles have ever made, owing plenty to both the straight-forwardness of house and rock and the crazed syncopations of soca and dancehall. And considering Battles are possibly the tightest man-machine unit going now that LCD Soundsystem are dead, you can imagine how hot these grooves burn, and how meticulously they’re constructed – their most audacious attempt yet to make the line between “programmed” and “played” completely invisible.. – Pitchfork review – 2011

Tickets for both shows are on-sale November 28th.


Supported by Witch Hats & Other Places