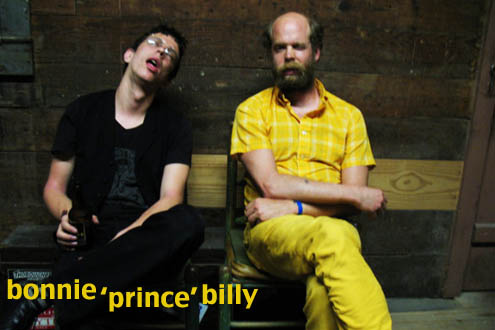 Six years, six albums and countless singles, eps and collaborations later, and finally this February – March, we are blessed with a return visit from our favourite royal, Bonnie ‘Prince’ Billy.

Born Will Oldham in Kentucky USA some 40 years ago, Oldham christened the Bonnie mantle after the dissolution of his previous outfit(s), the hugely influential alt-country outfits Palace Brothers and Palace Music. Since then Bonnie ‘Prince’ Billy has amassed a catalogue of some twelve studio-albums, all weirdly inventive takes on the roots genre: country-western, bluegrass, Appalachian folk, and which has seen cover versions from the likes of Johnny Cash, Cat Power and Mark Lanegan while the list of renowned public admirers would fill a press release on its own.

His most recent release, Wolfroy Goes to Town, continues in his own unique tradition but in true maverick style moves ever sideways from expectation, this time with the addition of vocalist Angel Olsen – a solo performer in her own right – and guitarist Emmett Kelly; Billy’s most recent consistent collaborator and the one-man band known as the Cairo Gang. It is these performers plus drummer Van Campbell who will be joining the Bonnie ‘Prince’ Billy on this Australian tour.

Aided by vocalist Angel Olsen, Wolfroy Goes to Town is perhaps his strongest and most consistent collection for years. In fact, the entire thing is an absolute, unerring joy. NME 8/10

Live one can never know what to expect from Bonnie ‘Prince’ Billy other than to hugely entertained.

Oldham is made for this kind of gig, looking as he does like a pastor from the American South; he waves his arms theatrically as he delivers his lyrics, at times bending double as if the emotional weight of the song is a heavy cross to bear. – The Fly.Co.UK

Safe to say those of us who have followed Oldham as he has toured shyly and quietly in support of his seven earlier BPB releases have never seen anything like the Oldham who was energetically bounding around the stage on Sunday like a little yoga Buddha-slash-monkeyman in blue leotard and bare feet. – heyreverb.com

Call it country, call it folk, call it what you Will… it’s safe to say that there is nothing out there quite like Bonnie ‘Prince’ Billy.

Tickets for Melbourne & Castlemaine on sale Monday 21st November @ 9am. All other appearances on sale now.