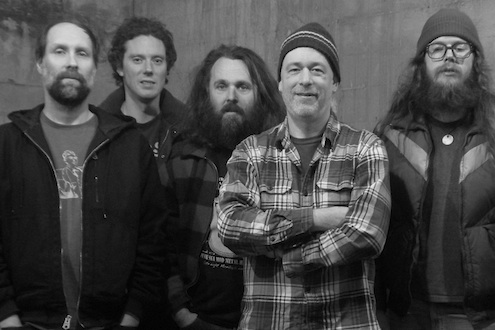 In the five years since their last Australian visit Boise Idaho natives Built To Spill have released two albums, replaced two band members, created the synth-pop side project The Electronic Anthology Project, toured the U.S.A many times over, DJ’d both at radio and parties and taken an almost three year break from live activity; now however, with the inclusion of the indie-rock originals on the 2016 Golden Plains Festival, Australia finally receives another dose of that Built to Spill magic.

“Martsch formed BTS well over two decades ago, but the show last night proved Built to Spill aren’t so much indie survivors as they are rock and roll thrivers” – Dallas Observer May 2015

“With three lead guitarists radiating like a toxic plume, Built to Spill’s set felt like a giant wall of sound in lockstep with Doug Martschs’s wringing vocals.” Hey Reverb Sept 2015

Untethered Moon, their 8th and latest release is a triumph. An album that retains the spirit found on early fan favourites like 1997’s Perfect from Now On and 1999’s Keep It Like A Secret, whilst sonically taking the band one giant leap forward into as-yet-uncharted waters. It’s loud, it’s dirty and it’s very catchy.

Built To Spill sit firmly along their influences – Dinosaur Jr, Butthole Surfers, Neil Young, Blue Oyster Cult et al – as masters of uncompromising guitar-orientated rock, free of any of the usual rock trappings of grandeur and ego, focusing instead on the value of a good song, a good melody and an almighty noise!