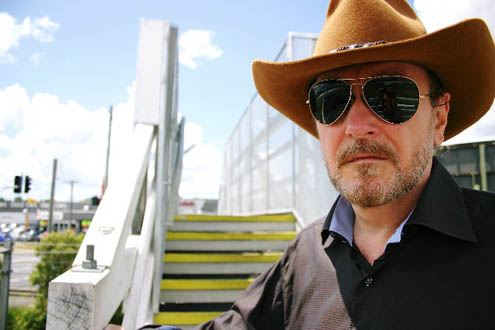 With a recent run of sold-out solo shows under his belt, Ed Kuepper is pleased to announce a March tour this time featuring his former sparring-partner Mark Dawson (on drums) as they re-imagine the Kuepper classics: Electrical Storm and Today Wonder.

Electrical Storm was Kuepper’s first solo album recorded in early 1985 shortly after the dissolution of Laughing Clowns. Musically a departure from his earlier bands (the original Saints and Laughing Clowns), Electrical Storm proved to be the most raw and stripped back recording of Kuepper’s long career and featured some of his most enduring songs including the title track, ‘Car Headlights’ and ‘Rainy Night’. Lyrically it was more straight forward, yet with the songs seemingly interconnected, its foreboding atmosphere is lightened up with glimpses of Kuepper’s trademark humour such as the musical quote from the Spiderman cartoon show in ‘When the sweet turns sour’.

Today Wonder was the album that began Kuepper’s wrecking ball-like prolific recording stretch in the 1990s. Recorded and mixed live in the studio over two days in early 1990, it features only Kuepper on effects-laden acoustic guitar and vocals, with Mark Dawson on drums and cardboard box. Kuepper described the sound at the time as “ambient rockabilly” and stated more recently that it was the album that enabled everything after it. Today Wonder draws on a host of Kuepper’s earliest influences and incorporates them into something new and adventurous. Several covers become originals and originals become covers in a seamless blend which still sounds unique to this day.

Tickets for the Kuepper/Dawson shows are on-sale now.

Before all that, though, Kuepper will appear in solo mode as special guest to Grinderman at their Sydney & Melbourne legs of their Australian Big Day Out tour. You can never have enough Kuepper.