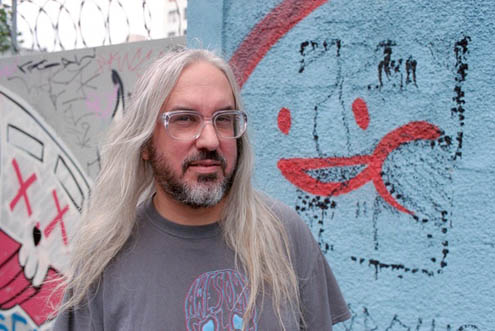 Folk-rock troubadour J Mascis makes his long awaited solo-acoustic tour appearance this summer appearing at The Falls Festivals in Marion Bay and Lorne and for a series of headline shows along the East Coast.

Mascis has toured Australia in solo mode before of course, both as a headliner and as support to Sonic Youth, but this tour is the first to feature J and an acoustic guitar and comes off the back of his impressive debut solo-acoustic release and his first for Sub Pop, Several Shades of Why.

After two decades of creating influential music, the fact that this astonishing album features some of his best songs to date makes this as important as it is unfalteringly beautiful. – KERRANG

The result is a beautifully fragile acoustic record that positions him as the missing link between Kurt Cobain and Johnny Cash. – ROCK SOUND

And though the electric may have been swapped for an acoustic the intensity and even the decibel levels remain intact (relatively) as does Mascis’ ability to tear shards out of his instrument whether it be hollow or solid bodied.

Mascis opened with “The Wagon,” a stand-out track from Dinosaur Jr.’s iconic 1991 major label debut, “Green Mind,” a bone to the many long-time Dino fans in the packed Hi-Dive, the perfect setting for his soul-baring set. Much of the performance was comprised of Mascis laying down several-minute loops and then playing over his own intricate leads. I’ve seen other guitarists use this method of “playing with themselves,” but none as impressively as this. Mascis created something complex and spontaneous; his guitar lines were not simple rhythm parts, but melodic lines for him to weave intricate harmonies atop. – REVERB

Check-out the fabulously freaky videos for Listen to Me and Is it Done from Several Shades of Why and don’t miss J Mascis, live, this January.