“Energy means sweat and sweat means action and The Jon Spencer Blues Explosion (The Blues Explosion!!! or JSBX to you) wants everyone to take that, rub it all over and spread the word.” 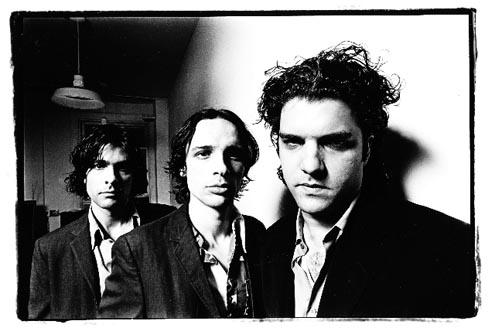 Anybody who witnessed The Jon Spencer Blues Explosion on their first visit to Australia and New Zealand in the early nineties as support to US hipster Beck, would have seen a man – a band – seemingly possessed with the spirit of everything great rock ‘n’ roll has to offer. A flat out garage attack of diamond riffs, snarled vocals, blues hollering, the funky drummer beats and tunes you can actually dance and/or fuck to. Not surprisingly they shattered Beck and co into a thousand tiny pieces.

An explosive appearance on Saturday morning TV show Recovery followed (catch the evidence here), cementing their reputation, and saw the JSBX return for subsequent sold out headline tours and two guest appearances on the travelling Big Day Out circus, the most recent, in 2005, being the last visit to our respective shores.

Yes, it has been a long time between drinks and squealing theremins but The Jon Spencer Blues Explosion are finally heading back down-under appearing at the Sydney and MoNA/FOMA Festivals and at most major cities including Melbourne where JSBX will perform Orange, their third and arguably most essential album, in its entirety.

Orange was the soundtrack for a lot of shenanigans at various parties back in the day. It even made me wanna shake my ass like a mofo, which is really saying something. Listening back to it now, it still makes me wanna let it all hang out in my rockin’ chair. I honestly forgot how dirty, raw and dang good this is.  In fact, I’m naming it my second Forgotten Gem. VERDICT: TURN IT UP, rip off your shirt, mess up your fucking fauxhawk, wannabe, and howl at the moon like you mean it! – YOURZENMINE

All festival shows are on-sale now with all club show sales to open at 9.00am November 16th.

The band starts at 11 and stays there. The band played an hour-long set, then returned for almost thirty minutes of encores. In the course of the show, the band tore through many favourites including “Afro”, “Blues X  Man”, 2Kindsa love”, “Calvin”, ”Chicken Dog” , “Fuck Shit Up”, “Mars, Arizona”, and of course “Bellbottoms.” –  Notes From Underground 2010

Don’t miss The Jon Spencer Blues Explosion tearing it up throughout Australia and New Zealand this coming January.


Supported by The Coolies


Supported by The Keep On Dancin’s