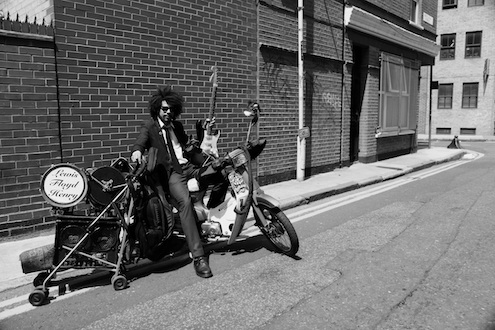 For the past few years, one man band Lewis Floyd Henry has pitched up on street corners around London gradually spreading the word of the blues and the knowledge of his genius to passers by and the oddly curious. He arrives armed with a pram carrying a battery-operated amplifier and a custom-made drum kit beating out covers of Jimi Hendrix, T-Rex and The Stooges and has accrued 100,000 YouTube hits for a performance of the The Wu-Tang Clan’s ‘Protect Ya Neck’ performed outside Tottenham Court Road tube station.

In addition to his cover versions, Lewis also crafts his own tunes diversifying beyond his initial folky blues style, into high-velocity rock grooves worthy of the mighty Jimi Hendrix Experience. His debut album ‘One Man & His 30W Pram’ is to be released later this month and streamed for you right here.

His uniqueness has also lead to him to festival performances around the UK and this month, Lewis Floyd Henry lands in Australia  as special guest of the Perth International Arts Festival and for a series of east coast dates.

‘Others were convinced that the unbilled Lewis Floyd Henry was the ultimate highlight, a busking one-man band who played Stooges’ songs by the lake and a 20-minute version of Free’s “All Right Now” with a fuzzbox, tiny practice amp, toddler-sized drum kit and guitar solos played with his teeth’ – The Independent 12.8.09

The unlikely Hit of the Big Chill, Henry sets up in fields, armed with a guitar played with his teeth and tiny drum kit played with his feet. A one-man-band. Possibly quite mad, but brilliant.’ The Guardian Film & Music P.2 14/9/09

Don’t miss Lewis Floyd Henry’s Australian debut this March. Tickets for all shows available at the door unless otherwise noted.