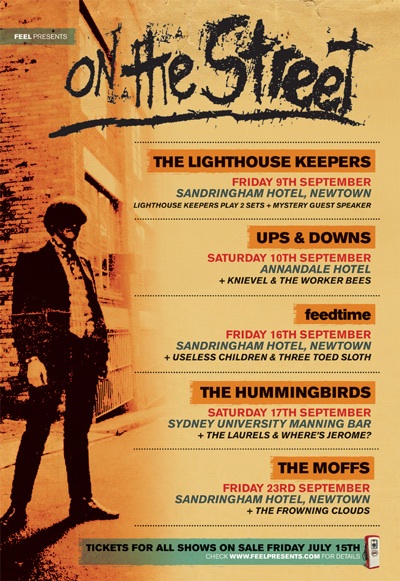 There’s been a lot said and written about Sydney’s inner-city music scene of the eighties and early nineties – and rightly so. For many it represented the city’s most fertile period of musical activity and produced an amazing array of talent who, if they didn’t achieve mainstream success or particularly lengthy careers, left a legacy large enough to be considered news-worthy so long after the event.

Feel Presents has long been a supporter of this era having released two volumes of the 2CD collection Tales From the Australian Underground: 1976 – 1990 as well as promoting tours for Radio Birdman, The (original) Saints, Died Pretty, Laughing Clowns and more.

This time around Feel are showing their support for the era via a series of live shows entitled On the Street (a term familiar to all discerning gig goers of the time) and this September, together with the Sydney Fringe, will present a month of gig-going activity recalling that recalls those heady times.

But it’s not all about fond memories with support coming from a selection of bands carrying on the traditions of these pioneers, eager to keep the flame of the originals alive. Got you highlighter out? Here’s the gig guide.

Tickets for all shows on sale Friday July 15th from www.feelpresents.com

Brisbane natives Ups & Downs produced some of the finest pop-rock songs of the era. Many will recall the indie-chart topping singles The Perfect Crime & The Living Kind (as heard on Bondi Rescue) as well as their take on the Neil Diamond classic Solitary Man taken from the brilliant Sleepless mini-album. Ups & Downs will be reconnect this time (having previously reformed for the in 2006 Brisbane only Pig City Festival alongside the original Saints) to launch the CD version of Sleepless, a best of, that also features all the a-sides, various b-sides, ep tracks, rare tracks and more from this very memorable band. A collection and event not to be missed!

Although largely unheralded in their home country, Sydney’s feedtime recently played a reunion show in San Francisco some 22 years after they first broke up! The show was put together by US record label S.S, a vinyl only label who will be releasing a 12″ of feedtime rarities later this year. It’s not the only forthcoming US release for the band though, with indie-giant Sub Pop also releasing a comprehensive 2CD collection The Aberrant Years that will bring together virtually all the band’s recordings for that iconic independent Australian label. Energised from the San Francisco show, feedtime have also agreed to perform a show for the Sydney Fringe and Feel Presents couldn’t be more proud.

Following a powerhouse comeback at the 2011 Big Day Out, The Hummingbirds reunite once more for this one-off Sydney headline appearance. Expect to hear the hits & more including anthemic singles Blush and Alimony from their 1990 debut album loveBuzz, recently voted into the 100 Greatest Australian Albums of All Time sharing space with such disparate acts as the The Loved Ones, Hoodoo Gurus, InXS, AC/DC and Kylie Minogue. A major achievement for a band who once called Darlinghurst’s tiny Palace Hotel their second home. A major event that will be sure to sell very quickly.

Supported by The Laurels