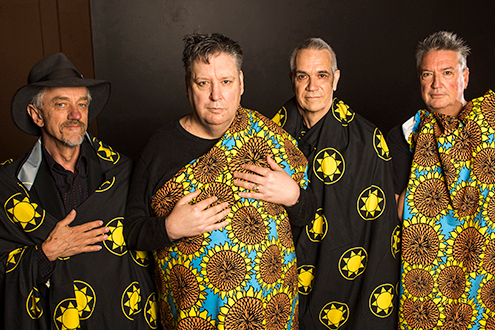 And so it was that on Dec 31st 1980 Sunnyboys released their debut eponymous 4-track ep. Recorded in October the same year for a mere $500 and featuring the tracks Love to Rule, What You Need, The Seeker and what would become the bands signature tune, Alone With You.

“ The Sunnies kept rehearsing Alone With You and bloody hell the bloody thing was hypnotic mate! Super, super, super hypnotic. We were having a chat one day and they said they wanted to record it.” – Lobby Lloyde

“I always thought it was the song with the most potential to be a hit. It was written at Longdown St, Newtown in between going to art school and rehearsals. It was partyl about a chick I knoew and partly about a generalization about the pent up feelings of teenage lust and love” – Jeremy Oxley

Jeremy had written all four tracks prior to the band ever getting together. Love To Rule was done in just a one take. Whilst the band had already attempted demoing these songs with Dragon’s Todd Hunter, they demonstrated a maturity and level of cohesion that belied that one sole previous studio episode.

Richard Burgman: “We were in Trafalgar studios for two days. One day recording the four songs, the next mixing. Day one was setup, get sounds, and record each song live off the floor. We did most songs about four times until we thought we had a good enough version. We then recorded vocals and minor overdubs. Day two was mix day. We had it all done by day’’s end. It was quick, and new, and exciting. I think the energy and excitement we felt shows in the results.”

Within two and a half weeks the first pressing of one thousand copies had been snapped up with a further 1000 selling out almost immediately after. In 1981, due to continuing demand, a remixed 12” version of the ep was released when it was discovered that the original ep masters were missing.

Jules: “The master which was kept at EMI Studio 301 – all our masters we kept up there for safe keeping basically – mysteriously disappeared. These were the tapes that had been sequenced and compressed and everything in order to press the actual single up. The tapes were precisely how the single was as opposed to the original multi track tape, which Lobby obviously already had. So he went and remixed them and I think there’s some new guitar parts on a couple of the songs. So we didn’t have the EP, we couldn’t do the EP any more so we decided to make it a twelve-inch. The seven inch was deleted and we put the twelve inch out.”

After that we would have to wait a mere 38 years before the original ep versions would finally make their way back into circulation via the release of Sunnyboys 40 (vinyl, CD, cassette and streaming) which featured all four original ep tracks plus four brand new recordings.

To celebrate all this awesomeness Sunnyboys have announced a one-off show at Sydney’s almost as iconic Opera House, celebrating the 40th anniversary of their eponymous ep with a set largely focussed on the material the band were playing in 1980-1981. Due to covid-restricitons tickets are very limited and this show will sell out quickly. Pre-sale ticketing details below.

“I’m exhilarated to think that From the hallowed halls of the school dance , this garage band has broken through the time barriers to arrive in 2020 to play at perhaps Australia’s prime entertainment venue, the SOH! It is a sign that the songs have stood the test of time and are still meaningful to a generation pursuing the same dream of love, happiness and acceptance. Playing my songs live to a dancing, singing audience and feeling the joy is always the highlight and something I am looking forward to following such a harrowing year.” – Jeremy Oxley

On-sale from 9.00am Tuesday 2nd December.

With Violent Femmes
Tickets via ticketmaster.com.au