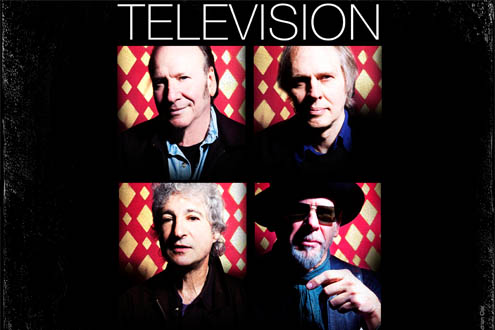 Founded in New York City in 1973, Television played their second ever show in early 1974 at then fledgling country / bluegrass club CBGB’s inadvertently creating a hub for their own activity as well as the pre-alternative culture of the lower Eastside and like-minded individuals including The Patti Smith Group, Blondie, Talking Heads, Richard Hell, The Heartbreakers & Ramones.

In 1975 Television followed up their reinvention of CB’s via the release of their debut 7″ Little Johnny Jewel, a two-sided 7 minute opus of street talk and taught no frills guitar work that featured the prodigious talent of singer / guitarist Tom Verlaine. Released on the independent record label Ork, it is one of proto-punks rarest and most valuable finds.

In 1977, following increasing major label interest Television finally signed to Elektra (home to The Doors, The Stooges and Love) and released their debut album, the absolute classic, Marquee Moon to massive critical acclaim. It was an instant success cracking the top 30 in several European countries and going on to become of one rock’s most influential albums.

“The influence of ‘Marquee Moon’ cannot be overestimated. The post-punk movement certainly took on board numerous aspects of the record – the clinically precise instrumentation, the clean sound and the introspective, vaguely gloomy feel. That filtered through to the indie movement of the ’80s, for whom the record became one of the sacred texts, while even bands like The Strokes have clearly taken inspiration from it. It would not be an overstatement to say that ‘Marquee Moon’ is to the ’70s what ‘The Velvet Underground & Nico’ was to the ’60s.” – NME 60 Most Important Albums of NME’s Lifetime

In 1978 Television released their second album, Adventure. While less favourably received than Marquee Moon, Adventure is still a masterpiece of songwriting and musical interplay. However, by the end of 1978 Television had split up. The drudgery of touring, the individual band members’ own artistic beliefs, and internal tension cited as the reasons.

In 1992 Television reappeared – albeit briefly – producing an eponymous album and playing select shows including a headline show at Glastonbury, to further acclaim before again disappearing from the limelight. A career band Television clearly are not.

Then, in 2001, Television made a surprise return at the UK’s All Tomorrow’s Parties Festival. This time though, they decided to hang around continuing to play sporadic live shows and even threatening a new album.