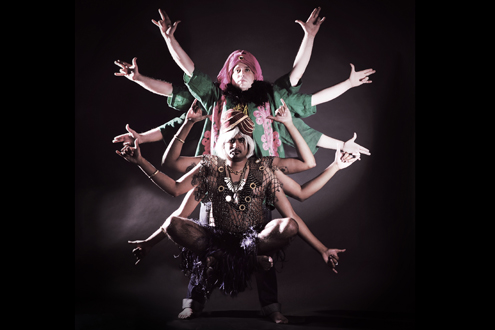 “This dynamic duo has relentlessly pursued an uncompromising vision of the subversive power of music that pays no heed to commercial imperatives. Standing outside the industry, two fingers raised in salute, they have nevertheless managed to forge an international career completely on their own, idiosyncratic terms.”

The pioneering rock’n’roll legend that is The King Khan & BBQ Show announce the side shows to their Splendour In The Grass appearance.

The fabled duo (comprising singer / guitarist King Khan and drummer / singer / guitarist Mark Sultan) made their Australian debut at the request of Lou Reed & Laurie Anderson for the 2010 Vivid Festival will play additional shows in Sydney & Melbourne in celebration of their recently released album Bad News Boys, their first in 5 years.

Entirely unoriginal, but the sort of thing that, 55 years after it was invented, it’s still hard to get enough of. – UNCUT ****

At its core, Bad News Boys is a joyous celebration of all things rock’n’roll by two guys who seem to have it running in their blood. – DROWNED IN SOUND

The band infamously broke up at that Sydney Opera House show. The venue and event organisers branding their show, and Khan in particular, a security threat! Arguments ensued and well, that was that. They managed to reconvene some three years later though, and returned to Australia in 2013 for a series of sold-out shows. Bad News Boys brings the manic-duo into the present.

The King Khan & BBQ Show’s formula of mixing timeless classic rock’n’roll melodies and harmonies with pure butt shaking savagery has hit the nail right on its head once again. Get lost in the romantic ballads about love and loss. Get pummelled in the gut with their return to classic floor punching hardcore. Get all loosely goosey with their true R&B Gospel salvation/salavation and feel the Holy Spirit deflower your holiness. Get crushed by the crunchiness in their celebration of crunch. Just get! Got it? Good! – Unknown.

Geelong’s newly crowned garage-kings The Living Eyes will guest on both shows with further support from Los Tones (Sydney) and The Pink Tiles (Melbourne).

Grab your own salad plate and head on down to the box office on Friday May 1st for tickets to The King Khan & BBQ Show, proudly presented by Feel.

Supported by The Living Eyes & The Pink Tiles

Splendour In The Grass
Saturday 25 July 2015