THE RETURN OF TURBONEGRO! 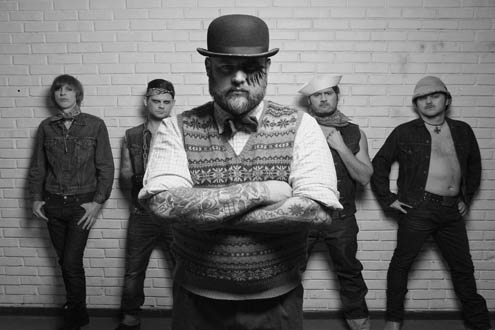 Norwegian death-punks Turbonegro return to Australia this December appearing at the Meredith Music Festival and for headline appearances in Sydney and Melbourne. It is the band’s second visit to Australia and their first since 2003.

Turbonegro hit the high water mark in 1998 with the release of their fifth album, Apocalypse Dudes, an intoxicating mixture of glam, punk and US hardcore garnished with a healthy sense of the absurd and ribald and / or tongue in (ass) cheek humour.

“Apocalypse Dudes is the perfect mix of classic 70’s US punk / rock’n’roll like The Dictators, The Heartbreakers & The Ramones… every tune on this release is fucking brilliant”.- Moshable

Despite the relative success of that album, and following two sold-out European tours in the same year, Turbonegro announced that they were breaking-up and collectively and individually withdrew from the music industry.

In their absence a sizeable cult following developed with fanclub chapters, dubbed Turbojugend (Turbo Youth), springing up around the world – Sydney included. A tribute album, Alpha Motherfuckers, was also released and featured performances by Queens Of The Stone Age, Nashville Pussy and Therapy? amongst others.

In 2002, Turbonegro responded positively to a request to reform for a Norwegian Festival and in 2003 announced their intention to continue by releasing their sixth studio album, Scandinavian Leather, and touring Australia with fellow deathpunks, Hard-Ons, for the first time.

Another album, Party Animals (co-produced with Steve McDonald, bassist with L.A. glam-punks, Redd Kross) followed In 2005 and featured arguably the band’s best known track, the anthemic All My Friends Are Dead.

In 2010, Turbonegro were again forced into semi-retirement following the departure of long serving (and long troubled) singer Hank Von Helvete. Determined not to let this setback derail them, Turbonegro quickly announced the signing of Tony Sylvester (formerly of London based hardcore band The Lords Of Nothing) on vocals, alongside new drummer Tommy ‘Manboy’ Akerholdt, debuting the new line-up in July of 2011.

“The Duke of Nothing, owned his new job and killed it… it was a monumental set from the newly reformed band and a big bold statement that “WE ARE BACK!” To be completely honest, I’ve never heard Turbo sound better.” – Volcom

In 2012, their trajectory ever on the up… Turbonegro released their ninth album, Sexual Harassment to a universally ecstatic response.

“Sexual Harassment is an ass-kicking, face-punching, booty-shaking slice of rock ‘n’ roll on par with the group’s best efforts. Even with a new vocalist out front, this is very much a Turbonegro record, and it’s hard to imagine any fan of the band not loving Sexual Harassment.” punknews.org

With long standing members Happy Tom, Euroboy and Rune Rebellion also on board, Turbonegro are excited to announce their first visit to Australian soil since 2003.

Don’t miss the ONLY AUSTRALIAN SHOWS for Turbonegro this time around (extra curricular activity denying anything further).