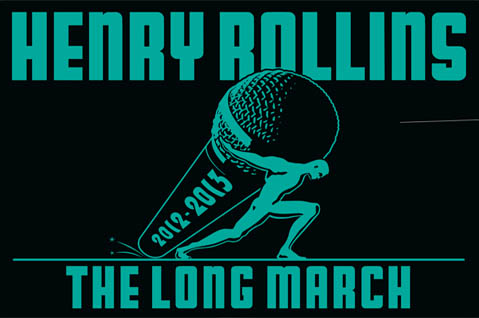 For better than a quarter century, Henry Rollins has toured the world as a spoken word artist, as frontman for both Rollins Band and Black Flag and without a microphone, as a solitary traveller with insatiable curiosity bypassing the resorts in favour of places like Siberia and Senegal, or Burma and Bangladesh. His curiosity and hunger for experienced based knowledge, teamed with his willingness to travel, his no-holds-barred delivery of his opinions and observations, and wicked sense of humour make him one of the most inspiring and interesting commentators / entertainers of a generation.

He returns to Australia in 2012 for The Long March tour, a month long national odyssey – a stark contrast to the four intimate appearances he made in Sydney and Melbourne earlier this year, announced on an email, and which sold out in minutes.

So far in 2011 he has toured the world delivering his provocative, humour riddled spoken word show; joined alternative kings Dinosaur Jr on the road interviewing them live on stage after each show; released Occupants, a collection essays and his own photos taken in Bangladesh, Burma, Cambodia, India, Indonesia, Northern Ireland, Saudi Arabia, South Africa, and elsewhere over the last few years; rolled out his weekly radio show on KCRW (most likely the only radio show in the world where you will hear Kraftwerk, Frank Sinatra, The Buzzcocks and some exotic local South African artist in the one playlist); travelled to Sudan as an ambassador for Drop In The Bucket; filmed a TV series about folk who own and consume exotic creatures called Animal Underworld for National Geographic; performed at Leeds, Reading and Edinburgh Festivals and spent a week in Haiti talking with locals who are still struggling to recover their lives from the earth quake that struck two years ago.

By the time he lands in Australia in April for The Long March tour, all of the above will be old news, and there will be a plethora of new tales to talk about. Rollins’ resume expands by the month, with his location changing by the day.

Perth & Margaret River on sale Now. Tickets for all other shows on sale Monday 28th November@ 9am. To access the Henry Rollins exclusive Presale sign up to the Feel newsletter on this site now!