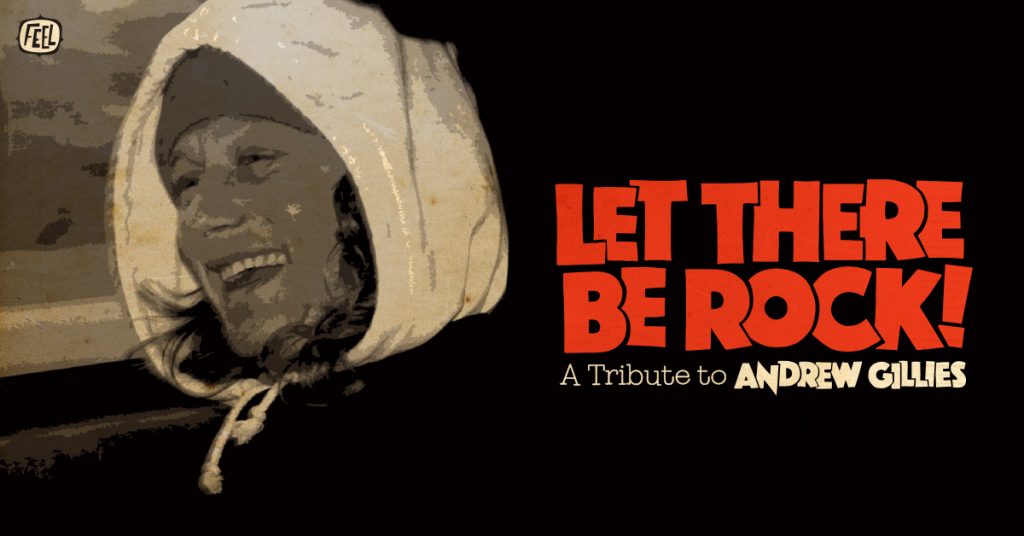 LET THERE BE ROCK! brings together three long-standing heavyweights of the Australian underground rock scene: The Celibate Rifles, Hard-Ons and The New Christs,  in celebration of the life of one Andrew Gillies.

‘Gillsey’ as he was more affectionately known, was a fixture at shows by all three of these iconic Sydney acts for over 30 years. The first decade as a resident of Sydney and the remaining two decades as a resident of the northern NSW town of Uki, though, even the tyranny of distance would pose no problem to Andrew’s enthusiasm and drive to see and support his musical heroes.

In addition to being a major fan of all these acts Young Andy also served as stage tech for the Hard-Ons touring Australia, Europe and the USA from the late eighties through the early nineties, a role he also commandeered for Ratcat, Ed Kuepper, Died Pretty and others. A slipped disc while working as carpenter reduced his participation in such activity reduced him to more domestic tasks, though, he still continued to tour Europe with his beloved Hard-Ons working as their merchandise seller right up until 2017.

Andrew Gillies was hugely loved by all those he worked for but was equally adored by those who only just met him! He was funny, engaging, smart and erudite and he loved people as much as he loved life. Andrew Gillies was a rare breed.

“Andrew Gillies was my hero. He was the only person I had met besides my own father who was 100% unhindered by self-reflection nor self-appraisal. He had always adopted a sense of style that was so laid-back and undefined – and that was just because he really was never anything other than HIMSELF – and it was this amazing ability to be unaffected and unpretentious in the Sydney underground music scene, that made all the members of the Hard-ons adopt him as a true brother. The world has tragically lost a one-off gentle soul who made a profound mark on every person he met, too early. I love Gillsie. I can’t believe he is gone.” – Ray Ahn (Hard Ons)

NO-ONE was as lovable or as special!! Anyone that met him even for the briefest of moments knows what I mean.. Not ONE nasty bone in his body.. Not one!!! – Peter Black (Hard Ons)

Andrew may not have been in a band but of all of the great people we have been lucky enough to come across on the rock and roll treadmill he was on the top shelf. He was friends with all the cool kids, worked with all the best bands, still he had time for a nobody like me. There can be no greater gift a person can give you than to feel good about yourself. If you knew him I know you can relate. – Dave Curley (Proton Energy Pills / Tumbleweed)

Joining The Celibate Rifles, Hard-Ons and The New Christs in this celebration of Andy’s life and making their Sydney debut at the same time will be the Bombed Alaskans; neighbours of Andrew in Uki and a supergroup of sorts featuring members of both The Celibate Rifles and The Eastern Dark. It’s the proverbial sauce-of-choice on Gillies beloved falafel roll and its all going down in his honour Friday May 5th @ Sydney University Manning Bar. Tickets on-sale Monday April 9th via feelpresents.com