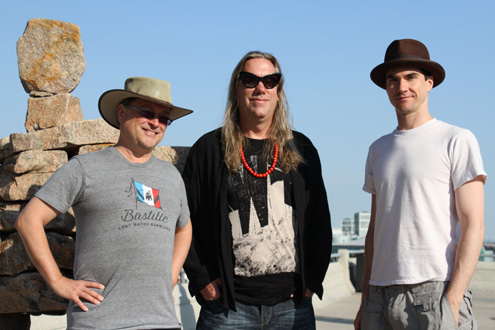 Legendary American band Violent Femmes premiered the first song, Memory, from their long-awaited and highly anticipated new record We Can Do Anything, due out this March. The track stands out as vintage Violent Femmes, and is one of the many new songs featured on We Can Do Anything that were chosen from singer/songwriter/guitarist Gordon Gano’s voluminous archives of ancient cassette demos and old journals.

Violent Femmes’ ninth studio album and first full-length collection in more than 15 years, We Can Do Anything is among the most provocative and playful in the legendary band’s remarkable canon. As the title makes plain, founding Femmes Gano and Brian Ritchie (acoustic bass guitar, vocals) remain intrepid as ever before, traversing infinite genre and emotion via their immediately identifiable mash of rambunctious folk, minimalist punk, cubist blues, cosmic jazz, and back porch rock ‘n’ roll.

“What the Femmes are,” says Ritchie, “and I think we always have been, is a repository for American roots music. Most people think of us as a kind of rock band but we’re a lot more than that and I think this album represents all that in a really natural, cohesive way. It just flows smoothly between all these ideas.”

Violent Femmes came together in 1981 and were quickly applauded as one of the most inventive and original bands of the era, constantly pushing forward with their singular blend of folk and punk, sarcasm and spirituality. The Milwaukee-based band first attracted attention while busking in front of their hometown’s Oriental Theatre. The performance caught the ears of that night’s headliners, Pretenders Chrissie Hynde and the late James Honeyman-Scott, who invited the young group to open the sold out concert with a brief acoustic set. From there Violent Femmes released eight studio albums and more than a dozen iconic singles, among them such classics as American Music, Gone Daddy Gone, Nightmares, Add It Up, and of course, Blister In The Sun. Violent Femmes’ remarkable three-decade-plus career has earned them cumulative worldwide sales in excess of 10 million, with 1983’s VIOLENT FEMMES awarded with RIAA platinum certification eight years after its initial release.

The turn of the millennium saw Violent Femmes begin a long hiatus from the studio, only coming together to record a 2009 cover of Gnarls Barkley’s “Crazy” – returning the favor after Cee-Lo and Danger Mouse’s psychedelic soul version of “Gone Daddy Gone” proved a worldwide smash. Violent Femmes officially returned to full time action in 2013 with an acclaimed performance at Coachella before embarking on a wide-ranging tour that included headline dates and ecstatically received festival sets around the world.

Violent Femmes captured their fresh momentum on the 2015 EP, Happy New Year. Recorded in Hobart between sold out shows at the world famous Sydney Opera House and Tasmania’s Museum of Old and New Art, the EP was cut live in the studio – no baffling, no isolation booth, “the right production approach for the music that we make,” says Ritchie.

“It had the feeling people are looking for from us,” he says. “A feeling that I think exemplifies the rawness of our approach.”

The aesthetic success of Happy New Year led Violent Femmes to consider a proper new full length LP, though of course a conventional record was never in the cards. Rather, the band was determined to keep on the way they always have, driving in their own idiosyncratic lane.

“One of the things about the band getting back together again,” says Ritchie, “was can we make some sort of a valid artistic statement? A lot of bands of our vintage return and then try to do what other people are doing nowadays. We were always outside of the times – even at our most popular we were considered outsiders – so we had no obligation to try to be current. Because we never were current. Ever.”

We Can Do Anything was recorded as Violent Femmes traveled North America on a hugely successful tour alongside Barenaked Ladies. At seven weeks, the “Last Summer On Earth 2015 Tour” was the longest live trek for the Femmes in over a decade and its effect was to sharpen the already integrated unit even further.

The trek saw Gano and Ritchie fronting a seven piece combo featuring versatile drummer Brian Viglione (Dresden Dolls, Nine Inch Nails) as well as the one and only Horns of Dilemma, Violent Femmes’ ever-evolving cabal of multi-instrumentalist backing musicians. Veteran Horn of Dilemma Jeff Hamilton took on the producer role, overseeing the recording by virtue of expertise, expediency, and his long creative relationship with Violent Femmes.

Initial tracks were recorded in Brooklyn followed by a few additional stops at studios across the country. The Nashville sessions saw Violent Femmes and the Horns of Dilemma blowing at full gale live in the studio, busting out explosive arrangements that veer on a dime from hard charging stomp to intimate melancholy. The sessions showcase the indispensible contributions of such longtime Horns as percussionist John Sparrow and saxophonist Blaise Garza – a Horn of Dilemma since he was 14 years old. Additional fuel came from Barenaked Ladies’ Kevin Hearn, who stepped off his own tour bus to lend accordion, guitar, keyboards, and backing vocals.

Violent Femmes will celebrate WE CAN DO ANYTHING with a full-scale tour of Australasia around the release, lighting it up for a fervent following that now encompasses multiple generations of fans. Though it will come as no surprise to the band’s legion of loyal supporters, We Can Do Anything affirms Violent Femmes as a vital and contemporary musical force, its joyous sound and ageless energy suggesting the universe will be graced with more music before the passing of another decade.

Supported by Xylouris White
*SOLD OUT*