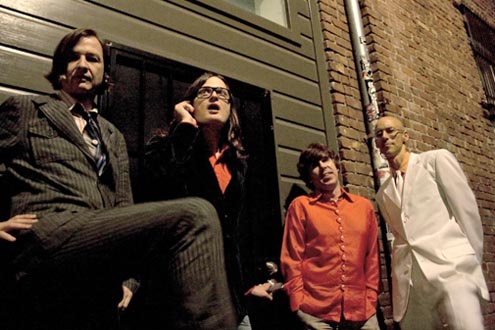 Californian deities Redd Kross will perform their genre-defying classics Born Innocent and the Posh Boy ep as side shows to the inaugural Dig It Up! series of events this month.

Released in 1980 and featuring teenage brothers Steve (12) and Jeff (16) McDonald alongside future Black Flag singer Ron Reyes (on drums) and future Circle Jerks and Bad Religion guitarist Greg Hetson, the Red Cross or Posh Boy ep as it has become known is more snot-nosed punk than the hardcore their credentials might suggest, indebted to the sounds of late seventies New York and L.A with their own teenage mentality thrown in. Song titles like I Hate My School, Clorox Girls and Standing in Front of Poseur both showed and belied their age and at little more than six and half minutes, Red Cross was an audacious debut suggesting great things to follow.

Born Innocent took the formula further (though not much) and upped the obnoxious quota with a cover of Charles Manson’s Cease to Exist and their own Kill Someone You Hate alongside trash obsessed nuggets in Linda Blair and Look On Up at the Bottom (the latter a cover from the low-budget movie Beyond the Valley of the Dolls) paving the way for future Redd Kross releases and in the process cementing their identity in the canyon of rock ‘n’ roll visionaries.

Having already been performed in the USA as part of the ATP Don’t Look Back series, Feel and Dig It Up! are more than chuffed to present one of rock ‘n’ roll’s most iconic and identifiable bands in their first Australian visit since 1993. Ladies and Gentleman, Redd Kross!