Arguably Creation records’ greatest ever signing, Swervedriver return to Australia this February to perform at the Perth International Arts Festival and for a string of headline appearances in Sydney, Melbourne and Brisbane. 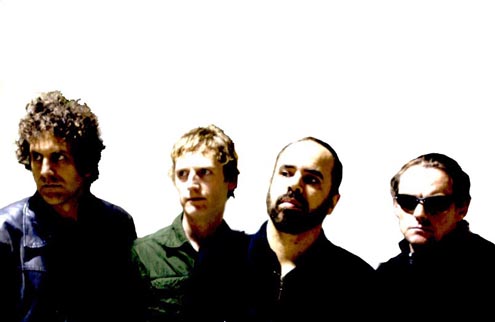 The band formerly known as Shake Appeal (taken from the Iggy & the Stooges song of the same name) emerged from Oxford, UK in the early 1990s with a trio of brilliant EPs: Son of Mustang Ford, Rave Down & Sandblasted, which featured equal parts guitar frenzy, sublime melody and hazy melancholia and straddled the divide between the shoe-gaze scene of the time (My Bloody Valentine, Ride, Curve et al) and the post-hardcore sounds of Dinosaur Jr, Husker Du and Nirvana.

It was around this time that Swervedriver toured Australia for the first time. Like America, Australians took to Swervedriver with zest and following the release of a fourth album, 99th Dream, on local label Shock, Swervedriver returned to Australia in the summer of 1997/1998… then again in May 1998… and finally in November 1998! The final visit as special guests of then rising-Australian stars, Powderfinger. That tour would prove Swervedriver’s undoing though, with the band performing their final show for a decade at the Bootleg Brewery in Margaret River, WA. Somewhat ironic considering recent events. Then in 2008, Swervedriver bowed to demand and reformed, touring the USA and performing at the giant Coachella Festival in California. More recently the band were invitees of one-time label mates My Bloody Valentine when they curated a chapter of the UK’s All Tomorrow’s Parties Festival.

For the upcoming Australian tour, Swervedriver mainstays: singer/guitarist Adam Franklin, guitarist Jim Hartridge and bassist Steve George, are to be joined by Raise-era drummer Graham Bonnar who has never toured Australia with Swervedriver before but who has served time as a member of our own Black Ryder as well as early incarnations of the Brian Jonestown Massacre playing on many of the early releases.

In 2011, Feel Presents is more than proud to be bringing Swervedriver back to Australia. Welcome back!

Supported by Giants Of Science & Loomer

Supported by Love of Diagrams and Demon Parade

Supported by Tumbleweed and The Laurels