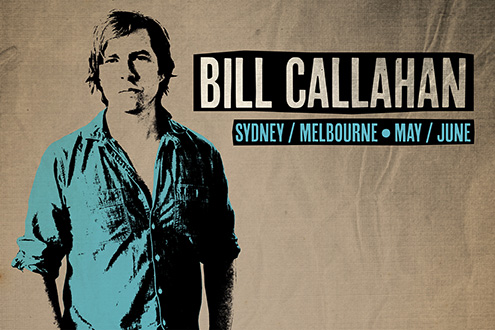 “this was a supremely magical, wholly mesmerising, night of space as the final frontier.” – SMH Vivid live review 2015

Well known for his rich baritone voice and unique take on classic Americana, Bill Callahan has been a prolific artist over the years releasing 12 albums under the name Smog before shedding that to perform as Bill Callahan in 2007 and producing a further 5 albums.

Last here in Australia for the 2015 Vivid Festival and a sold-out appearance at Melbourne’s iconic Hamer Hall, Callahan returns in 2017 for four more Vivid Sydney appearances and for an exclusive six show-three night residency at Melbourne venue Howler. Yep, you read that right; six shows at Howler, with early shows scheduled for a 7.00pm and late shows slated for 9.30pm.

The intimate format – a stark contract to the grandeur of the 2015 visit – will feature a two piece setup with Callahan being joined by guitarist Matt Kinsey. And in a further twist on tradition support on all six Howler appearances will be Melbourne comedian David Quirk.

“The guitar solos that Matt Kinsey enticed out of his Gibson on songs like ‘America!’, ‘Ride My Arrow’ and others were mesmerising. There were moments of sweet psychedelic beauty that were not over powering but transcendent. Sometimes it felt that Kinsey’s solos were being played from another room, not overly loud, but clearly hypnotic and beautifully imagined.” – Tone Deaf Vivid lives review 2015