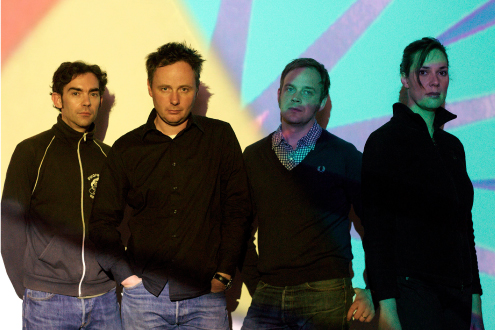 The London based group lead by founding members Tim Gane and Laetitia Sadier broke their ten year hiatus earlier this year via appearances for Spain’s Primavera Festival and So-Cal’s Desert Daze extravaganza alongside a reissue programme that has seen seven of the band’s ten albums given the deluxe reissue treatment. The ten year break also equalling their time away from Australia when they last appeared in 2009 for the Laneway Festival.

Across their original two-decade run, the French-English combo compiled an astonishing collection of retro-futuristic music, experimenting at the intersection of krautrock, lounge music, French yé-yé pop, and vintage rock ‘n’ roll – like Air if they rocked or Yo La Tengo if they built their music for hipster Parisian discotheque.

“Their hour-and-a-half long set was an expansion trip in its entirety. The band was tight and showcased some serious instrumental talent. Their set ranged from french disco to heavy ’60s inspired psych sounds and the crowd was loving it.” – Mxdwn Desert Daze review

“There’s no new material tonight, and no promises of any new records, but with this amount of energy, and their existing catalogue retaining such relevance and resonance, it’s a joy to have them back.” – Loud & Quiet Primavera review

“Stereolab sound fantastic, locking into grooves that feel both insistent and lissom.” – The Guardian June 2019