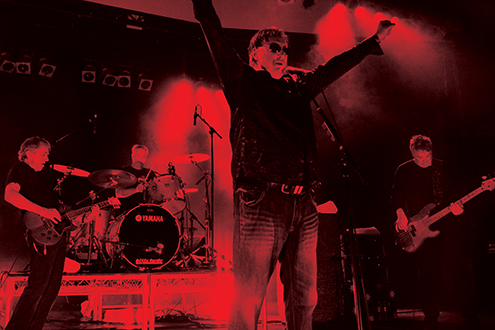 In 2020 Sunnyboys will celebrate 40 years since their inception (though a mere 12 years of actual existence) via a new release SUNNYBOYS 40 that brings together the first ever re-release of the band’s much loved 1980 eponymous debut 7” (featuring the original version of the all-time classic Alone With You) alongside four new recordings culled from the archives of chief songwriter Jeremy Oxley. The full length 8-track album will be released on November 29th via all formats including a limited edition vinyl release complete with hard cover 12 page 30cm x 30cm photo essay of the band as well as CD, cassette and all digital platforms.

“You can’t keep a good band down. These new and revitalised songs take it back to the reason behind the band in the first instance. The 40 years in between is nicely depicted in the change in voice while the energy and craftsmanship is still there in the sound, albeit a little fuller and rounder. I guess, it’s just like us too really… “ – Jeremy Oxley

And what better way to celebrate both the new release and the milestone anniversary than by doing what Sunnyboys do best – play live! And so Sunnyboys hit the east coast this February including first time ever shows in Torquay and for Sydney’s Twilights @ Taronga. Special guests Painters & Dockers will join Sunnyboys for the shows in Victoria and Brisbane while garage rockers  Rocket Science will join the birthday boys in Sydney and both the Gold and Sunshine Coasts.

Pre-sale tickets for all shows on sale now!