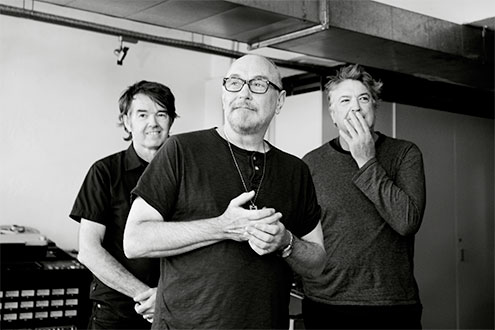 Forty years after the release of (I’m) Stranded – one of the great Australian debut albums of all time – Ed Kuepper returns with a brand new band and a brand new contender for the title: The Aints! The Church of Simultaneous Existence.

Made up from songs, musical elements and bits and prices that Sir Ed wrote from when he began high school in 1969 and started seriously fantasising about being in a band through to the Saints implosion in 1978 and arranged by The Aints! over 2017-2018, The Church of Simultaneous Existence is an album 40 years in the making. From the glorious slash and burn of Stranded-era track SOS ’75 via the horn-driven Red Aces (the mooted follow up to 1977s classic 7″ Know Your Product) to Winters Way recorded and released originally by the Laughing Clowns for their 1984 swan song LP Ghosts Of An Ideal Wife but written in 1975 and presented here closer to it’s original form.

”Things had started to move fairly quickly once The Saints recorded  [I’m] Stranded (Fatal Records) in mid ’76. We recorded three albums over the next two years as well as doing a fair it of touring, and for a while things were looking very promising, however, business problems, compounded by personal and artistic differences meant the band didn’t get around to recording all the material I had lying around….so forty [very] odd years later it occurred to me that these songs might well have made up a hypothetical 4th album….The Church of the Simultaneous Existence…..the songs that refused to die….performed in much the way they would have had the band not split up in 1978’” – Ed Kuepper.

In celebration of the albums release The Aints! also featuring Peter Oxley (Sunnyboys), Paul Larsen Loughhead (The Celibate Rifles / The New Christs) and jazz soloists Alister Spence (keybaords) and Eamon Dilworth (brass) will hit the road this spring for an extensive national tour performing all your new favourites from The Aints! with a treasure trove of classics from The Saints.

“It was a life changing moment when as a teenager I watched the Saints perform live on TV a slouching, hypnotic and blistering “Erotic Neurotic” with what I still consider today as a totally amazing, wrenching, electrifying guitar solo still in my top 3 of all time. That song and the classic album it came from still sounds as timelessly great as it did then, not to mention the rest of their brief legacy, Eternally Yours and Prehistoric Sounds. And, having recently experienced the Aints live, it is cultural gold that a new album with unrecorded songs from that era will finally see the light of day!’” – Mick Turner (Dirty Three)

“I started my first high school band a few weeks after buying Eternally Yours. I learnt how to play most of the songs on guitar. It’s rare a band can make a perfect album, let alone three… It’s even more extraordinary when 40 years later a fourth will be revealed.” – Jake Robertson (Ausmuteants / School Damage)


The Aints! Play The Saints
plus special guest Colonel Kramer and the Eamon Dilworth One Man Brass Ensemble
On-sale via feelpresents.oztix.com.au