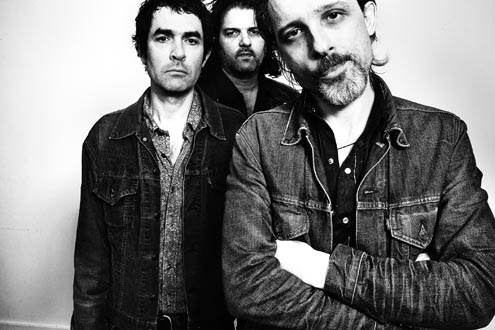 “Ladies and gentlemen right now I’ve got to tell you about… The fabulous, the most groovy… “

Get ready for the musical hysteria as The Jon Spencer Blues Explosion bring their fuzzed-up freaked-out live show back to Australia for Golden Plains 2013 plus a handful of headline shows across the country. Last here in January 2011 following a reissue campaign that saw much of their unavailable catalogue brought to light once more, JSBX blew the roof off venues in Australia and New Zealand, playing their classic album Orange in it’s entirety and selling out shows in Sydney and Melbourne.

“The band burn through Orange and into the red – into the white-hot speed-driven rock, a full 90 minutes of sure-shot raw powered amps-to-11-sleaze.” – Inpress

This time they bring with them a new album, Meat + Bone – their first in 8 years. 12 feverish tracks, burning with a renewed intensity and sense of self – this is Blues Explosion at their finest, a mature album that solidifies JSBX as the originators and the best. It hits the ground running with first single Black Mold, swaggers boldly through album highlight Bag Of Bones, while Danger is a pure punk-thrash attack pushed to it’s limits by Simmins’ pounding rhythms. This is dangerous, raw, rock n’ roll – as good as it gets; the real deal – the kind of music that rips into your soul and makes you want to howl at the moon. Check out the addictively disturbing new clip for Black Mold. View Black Mold here

Joining them across the country will be San Francisco’s Moon Duo. Formed in 2009 by Wooden Shijps guitarist Ripley Johnson and Sanae Yamada, Moon Duo’s fuse the futuristic pylon hum and transistor reverb of Suicide or Silver Apples with the heat-haze fuzz of American rock ‘n’ roll to create tracks of blistering, 12-cylinder space rock.  You can view the Sleepwalker video, with some very special cameos from a couple of members of King Khan and The Shrines. View Sleepwalker here

JSBX are back baby and they’ve got something to tell you. Prepare to stand up and testify – THE BLUES IS STILL #1!!

With Moon Duo & The Keep On Dancin’s