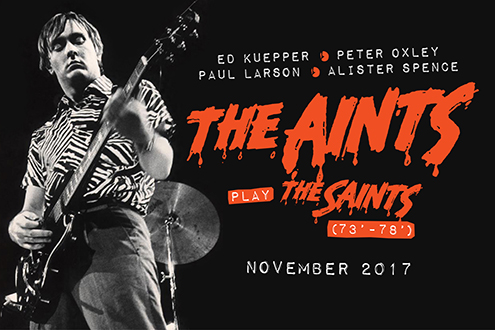 “Rock music in the seventies was changed by three bands—the Sex Pistols, the Ramones and The Saints.” (Bob Geldof)

On the 40th anniversary of the release of The Saints’ classic album ‘(I’m) Stranded’, founding member, guitarist and songwriter Ed Kuepper will revisit the material performed by that seminal band from an era when a suburban Brisbane band took their sound to the world.


plus Harry Howard & The NDE
Tickets on-sale via thegov.com.au


plus The Breadmakers
SOLD-OUT!


plus Harry Howard & The NDE + The Living Eyes
Tickets on-sale via cornerhotel.com
SOLD-OUT!


plus Harry Howard & The NDE + The Holy Soul.
SOLD-OUT


plus Mick Medew & The Mesmerisers
Tickets on-sale Friday September 1st via aussieworld.com.au and all oztix outlets.