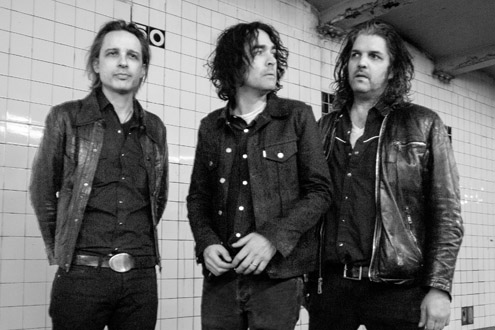 Hail, hail rock ‘n’ roll! And all hail the The Jon Spencer Blues Explosion! Back with a brand new album and an Australian tour in August 2015.

Freedom Tower – No Wave Dance Party 2015 be thy album name and it’s every bit as triumphant and exciting as the title would suggest. Rehearsed and polished in a string of secret gigs and unannounced opening slots in New York City theatres, hotel bars, and dives (often under assumed names), and recorded at the legendary Daptone House Of Soul in Bushwick, Freedom Tower – like the best sides that percolated up from the Bronx, the Lower East Side, and Greenwich Village across the 1970s and ‘80s – is more than a high-octane dance party record, it is a document of New York City, a chronicle of grit and terror and love!

“A record as chaotic and full of life as the city that inspired it, Freedom Tower sweats with feverish energy.“ Consequence Of Sound

“Freedom Tower pares the group back to the elements, the razor-wire riffs some of their best; while Spencer’s holler sounds as grease-slicked and super-cool as ever” **** MOJO

“Freedom Tower showcases three men who grasp that great rock’n’roll can be at once rudimentary, virtuoso and preposterous” **** UNCUT

For nearly a quarter-century the Blues Explosion have been sweating, freezing, eating, drinking, fucking, fighting, winning, and losing in New York City, perpetrating some of the most timeless moments of musical mayhem in the history of Manhattan and beyond. As ever, Jon Spencer tells the tales, Judah Bauer plays the blues, and Russell Simins smashes things to bits… And as always Blues Explosion stomp on the faux underground oasis peddled by bourgeois hipsters and marketing jocks to deliver the real deal —  rock’n’roll that is unapologetically nasty and strong.

“… JSBX brings everything they have to the performance. Its a S-H-O-W in all caps, with Jon Spencer presiding as carnival barker, MC, chief entertainer and all around head get-down honcho for the evening”. – Dagger Zine live review May 2015

There are eight million stories in the Naked City — but there is only one Blues Explosion!

Ladies & gentlemen, please welcome the fabulous, most groovy, The Jon Spencer Blues Explosion back to Australian shores this August. Tickets for all shows on-sale June 5th *


Supported by The Floors