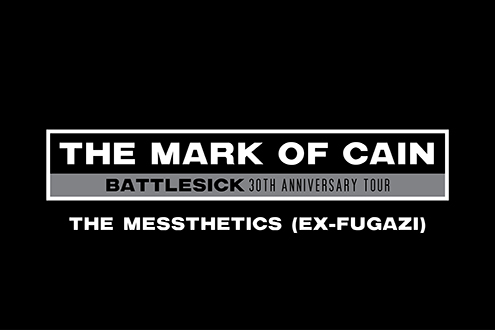 The Mark Of Cain return to the stage this October performing their debut album Battlesick in its entirety. Originally released in 1989 via indie Adelaide label Dominator Battlesick sounded like no Australian album before it or since. Tracks like Wake Up, Dead Man’s Mail, The Setback, Call in Anger and the title track addressed the fear of dreams, the threat of death, anger over disappointment and personal setbacks; not exactly the subject matter of an era when Kylie Minogue was queen and Ratcat were primed to become the pinnacle of the underground. It did not chart and in Australia it was barely heard outside of Adelaide however, it’s resonance did find an audience even if that audience had to come from places farer rather than near. “Like I heard the song Wake Up and I was like ‘whooah’, I woke up! And then I heard the song Battlesick and it was all over for me, that’s just an amazing song. For me, just as a songwriter, that’s the song for which you wish you wrote the lyrics. Like ‘damn man, he wrote Battlesick, that fucker. Let me write that. I mean the imagery in the song is amazing and Deadman’s Mail, that’s just incredible” – Henry Rollins“It was the height of my fixation on Vietnam and the idea of the countless unknown heroes who walk among us” – John Scott (TMOC)The precision three piece which features brothers John & Kim Scott (on guitar and bass respectively) plus drummer Eli Green (a touring member of The Mark Of Cain since 2014) will also a perform a second set or extended ‘encore’ of classics from right across their five studio albums strong career. The 2019 tour marks the first national tour by The Mark Of Cain band since 2015.“With no frills and an attitude of absolutely zero bullshit, The Mark Of Cain mercilessly pummelled the audience into submission with a wall of sound so dense it was truly hard to believe it was emanating from a three-piece band.” – Scenestar 2015Completing the touring line-up and making their Australian debut will be Washington DC three piece The Messthetics featuring Brendan Canty and Joe Lally (both ex-Fugazi) alongside guitarist Anthony Pirog. This will be the first visit to our shores for the Fugazi rhythm section since that band’s final Australian tour of 1997 while for jazz-trained guitarist Pirog, it will be his first. The tour follows the release of the trios eponymous debut album (Dischord) in March 2018“The freewheeling musical interplay of the band often sounded like improvisation, but ultra-quick changes and rhythmic variations attested to the fact that this incredibly complex sonic tapestry was both scripted and obsessively rehearsed.” – Riff Magazine 2019Together The Mark Of Cain and The Messthetics makes for the hard rock thinking mans most essential live event of the coming months – or ever!